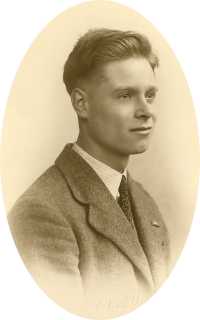 Ted Rogers was born in Sunderland at the end of the First World War. His father had a small business as a property agent, and often employed builders to repair the houses he managed; their way of life appealed to Ted, and rather than pursue a profession, like his brothers, he left school at 16, and became a bricklayer. His Methodist upbringing and an autocratic boss soon made trades union activist of him.

When the Second World War started he was called up and sent to Africa's Western Desert. He describes one of his tasks there:

Our relatively peaceful life in the gunpit ended when we were moved to an assembly point for a night attack. The troop commander gave us a brief talk on what was expected of us; the attack was to begin with an artillery barrage. The infantry would move up under the barrage, and we would move up after them. The engineers were to have cleared a path through the minefield, and Military Police were to lay down a white tape for us to follow. As some of the mines may have been missed, two men were to walk in front of each truck so that their feet would explode the mines and save the truck.

He survived his experience as a human mine-detector, but suffered appalling burns whilst shielding two of his fellow soldiers from the blast of a German bomb. 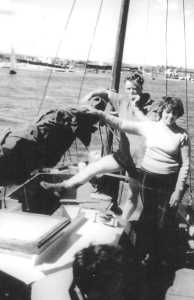 Despite extensive (and pioneering) plastic surgery, Ted has carried the scars of that injury throughout his life. But the only concession he has made to his "disability" was to move to the south of England, to a milder climate. He continued to work as a bricklayer - though there can be few bricklayers who would write:

Enid, freed from some of her domestic ties, got a job selling houses on one of the new estates, and as we had no intention of buying a car, we decided that with a family income of my hundred per cent disability pension, Enid's commission, and my wages, the time had come when we could buy a boat.

Still fewer, having bought and repaired a boat, and sailed it around the Mediterranean, would decide to sell it and build another. But Ted had always liked making things, and not only did he build a ferro-cement boat, with the help of his friends, he and his wife Enid proceeded to sail it across the Atlantic.


In his eighties, Ted published his autobiography, to which he gave the title Journeyman: a journeyman is a qualified apprentice - which Ted Rogers was - but the title of this book also refers to a man who has made many journeys, physically, intellectually and spiritually, embracing life and its adversities and ultimately triumphing.